In the wake of SB8, the Texas anti-abortion statute that empowers bounty hunters and vigilantes to sue anyone who helps a girl or woman exercise her constitutional right to terminate her pregnancy, at least one Texas urologist has seen a 15% increase in the number of men seeking vasectomies.  This is reported in yesterday's Washington Post and, while one angle of this particular article is the increased rate of vasectomies as a response to the decreasing availability of abortion services, the other is the emergence of "parody legislation" (it could also be called "parity legislation") that would require men to undergo vasectomies.  As the Post reports, "In their own form of protest, state lawmakers in Alabama, Illinois, and Pennsylvania introduced legislation that highlights the gendered double standards with regards to reproductive rights."  Women's bodies are regulated and their freedoms curtailed by states such as Texas in ways that men would never contemplate, let alone submit to were they faced with a comparable restriction of their bodily autonomy.  That, at least, is the theory behind such parody laws: to get people to think about the disparate effects that abortion restrictions have upon the rights and dignity of people with uteruses but not on those without.  As Christopher M. Rabb, one of the sponsors of these proposed bills explains,

For far too long, the public debate around abortion, contraception and related reproductive matters has thrust government into the center of restrictions on the bodily autonomy of women and girls.

Rarely is there a meaningful dialogue around public policy focusing on the personal responsibility of cisgender men in this sphere.

The rights of cisgender men have always been paramount in our society with little focus on their responsibility as inseminators to change their behaviors for the good of their partners, families and society at large.

Rabb's proposed legislation "blew up in a way he didn't expect," prompting "thousands of hate-filled emails, Facebook posts and even death threats."  Afterward, Rabb commented on the reaction:

I underestimated the vitriol that this proposal brought.  The notion [that] a man would have to endure or even think about losing bodily autonomy was met with outrage, when every single day women face this and it's somehow okay for the government to invade the uteruses of women and girls, but it should be off limits if you propose vasectomies or limit the reproductive rights of men.

Rabb's heart may be in the right place, yet his statement seems oblivious of the fact that more than 80% of men living in the United States today have been subjected to a radical penile surgery as neonates and that, to this day, more than half of all males born in the U.S. still are subjected to this harmful and medically-unnecessary surgery.  Because penile circumcision is irreversible, the boys, the adolescents and the men that these infants become will never fully experience either bodily autonomy or sexual autonomy.  The shape, the appearance, the sensory-capacity and the function of their genitals was decided for them, without their consent, before they were capable of resisting and making known their own wishes (other than through their anguished screams during the surgery itself).  Likewise, the nature and the diminished quality of their sex lives was decided for them before they could effectively object and exercise their right to own and control their own bodies.  If that isn't a denial of bodily autonomy, I don't know what is.

Clearly, the outrage directed at Representative Rabb isn't based on an objection to denying men bodily autonomy or reproductive rights - at least not consciously - since, statistically speaking, many of the same people who object to his proposed legislation undoubtedly also endorse and practice male genital cutting.  The more plausible explanation is simply that these objectors simultaneously hold multiple sets of contradictory views and "gendered double standards" regarding bodily autonomy.  On the one hand, they claim to support individual liberty and freedom of choice, yet they would deny girls and women exactly these by impeding and obstructing their access to safe, legal, affordable and timely abortions.  More to the point, they maintain a particularly "gendered double standard" in their opposition to Rabb's proposed legislation, presumably, because it would impinge male "reproductive rights," yet they countenance or even actively support legislation that is just as much an intrusion (if not more) upon the reproductive rights of girls and women.

But there is still another whole level of gendered double standard here.  Many of those who are so up-in-arms at the mere mention of legislation that would subject men to compulsory penile surgery do not object in the least when the compulsory penile surgery in question is non-therapeutic neonatal circumcision which, because of its permanence, affects men every bit as much as (and, in crucial ways, much more than) it does the infants these men were when they were subjected to it.  And it goes without saying that penile circumcision is incomparably more invasive, damaging and risky than vasectomy is.  Yet one form of compulsory penile surgery elicits a yawn while the other elicits outrage.  The explanation for this double standard is that, in our highly gendered culture, non-therapeutic circumcision is regarded as an important male rite of passage that serves to inscribe male bodies with masculine gender.  In contrast, vasectomy, because it obstructs male fertility, undermines masculine gender.  Thus, support of male genital cutting and outrage at the mere mention of compulsory vasectomy are, in fact, opposite sides of the same gendered coin.

These sorts of double standards are to be expected of those who oppose abortion rights.  They are even to be expected of those who celebrate the sexuality (and even promiscuity) of some (mainly hetero, cis males) but not of others (females and LGBTQ+ persons).  These are double standards that feminists and abortion-rights advocates are right to criticize.

What is more disappointing and difficult to comprehend is the double standard of those feminists and abortion-rights supporters themselves who claim to base their support of abortion rights on the more fundamental right of bodily autonomy yet remain silent in the face of - or even actively participate in - the denial of that right when it comes to the right of persons born with penises to own their own genitals and to control their own sexual lives.  This, too, is a gendered double standard: the notion that "My Body - My Choice" applies only to women and to female bodies but not to men and male bodies or to intersex bodies.  Thus, as gratifying as it is to see the gendered double standards that harm women (regarding their sexuality and reproductive rights) called out, it is galling to see the gendered double standards that harm men given a pass. 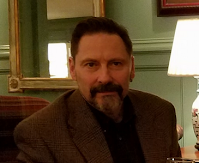 David Balashinsky is originally from New York City and now lives near the Finger Lakes region of New York.  He writes about bodily autonomy and human rights, gender, culture, and politics.

Posted by DAVID BALASHINSKY at 3:12 PM